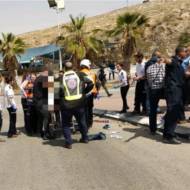 An Israeli civilian who thwarted a terror attack received a special commendation for his brave actions, ahead of Israel’s Independence Day.

An Israeli civilian who shot a Palestinian as he attempted to stab an Israeli couple at a gas station near Mishor Adumim earlier this month received a special commendation for his brave actions, which prevented a potentially lethal incident.

Kaufman, 31, was driving with his wife and baby when he noticed an ultra-Orthodox man running toward his car, with someone else chasing him with a screwdriver in his hand.

“I immediately understood that this was a terror attack,” Kaufman recounted, according to Israel’s Ynet news. “I immediately got out of the car. My wife screamed at me not to leave. I grabbed my gun, and ran about 150 meters chasing the terrorist.”

Reaching a bend on the road, Kaufman feared he would lose sight of the terrorist and fired a warning shot in the air. The terrorist kept running, but Kaufman managed to keep up.

Turning the bend, Kaufman shouted at the terrorist to stop, but he failed to do so. Instead, he turned to run at Kaufman, who shot him in response.

The terrorist, a 31-year-old resident of Shechem (Nablus), subsequently died of his wounds.

The incident ended without Israeli casualties.

Brig.-Gen. Barkat commended Kaufman for his rapid response, which he said saved lives.

“You got out of your vehicle without delay, acted quickly and with judgment, neutralized the terrorist and by doing so prevented a tragedy and the harming of innocent people,” Barkat said, thanking him for his “good citizenship.”

Kaufman received the honor during a special ceremony in which 28 policemen and policewomen were recognize for their outstanding service, ahead of Yom Ha’atzmaut, Israel’s Independence Day.