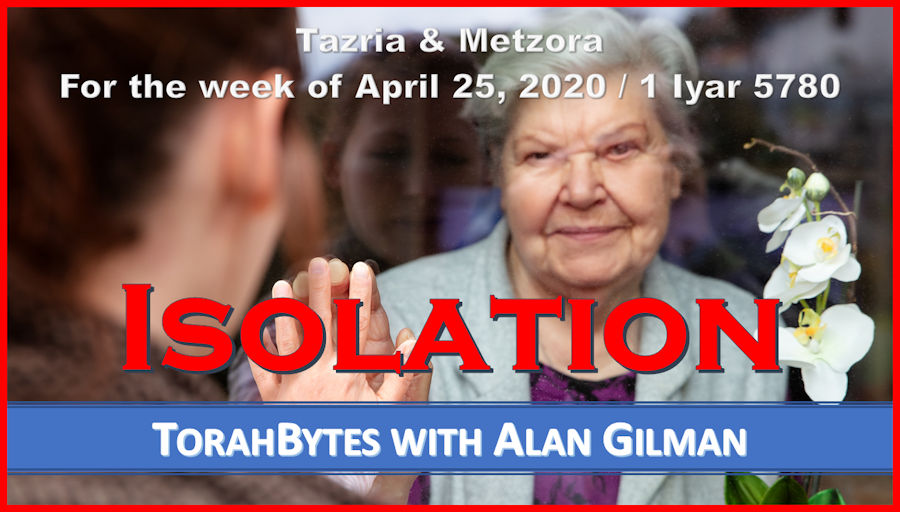 He shall remain unclean as long as he has the disease. He is unclean. He shall live alone. His dwelling shall be outside the camp. (Vayikra/Leviticus 13:46)

With the rare exception, human beings don’t like to live alone. Even most loners don’t want to be alone all the time. And when they do, they want to be alone by choice. It’s no wonder that one of the worst punishments people have ever devised is solitary confinement. We were meant to be in community, not in isolation, except under certain circumstances.

We are living in most unusual times. Never before have we seen what some are calling: “the quarantine of the healthy.” Normally, when there is a serious outbreak of illness, it’s the sick who are isolated. According to this week’s parsha (weekly Torah reading portion), this is the prescription for those afflicted with infectious skin diseases. Note that the God of Israel didn’t direct his people to do incantations, concoct potions, or other things we might expect from ancient peoples. Instead, the cohanim (English: priests) are told to conduct straightforward examinations based on objective standards.

What is strange for us moderns is the intimate connection between community health and ritual purity. It appears that the need for isolation was to protect the community from two types of contagions: human sickness and ceremonial uncleanness. The first we easily appreciate. But the second sounds like ignorant superstition. How would a disease, apart from its effect on other people, make a difference to God? Some may dismiss the genuineness of the ritual elements by taking them as a way to trick pre-scientific folks into doing what’s healthy in the name of religion. If that’s the case, it’s an argument for the divine origins of Hebrew Scripture, for how would the ancients understand the science behind illness? But far from being a trick to protect community health, the Torah’s integrated perspective of spirituality and physical health is a far more balanced approach than today’s “science explains everything” misguided philosophy.

While illnesses have symptoms that help determine their nature, illness itself is a symptom of the general broken nature of human beings. God did not design us to get sick at all. That doesn’t mean that every sniffle or cough is a direct indication of a particular moral failure. Rather, like everything else wrong with us, sickness is another reminder of the distance from which we have fallen. Isolating afflicted persons from Israel’s God-given rituals was therefore one of the ways that the community was reminded of our general separation from God. The protection allotted to the masses through this isolation undergirded God’s desire for health and restoration.

Reading about the quarantine of diseased persons in ancient Israel instead of the isolation of the healthy today may prompt some to question the direction of many of our government leaders. Without wading into the waters of my ignorance, the difference between the type of diseases listed in this section of the Torah and COVID-19 is the invisibility and severity of the threat. As far I as I do understand, the skin diseases listed in our portion are easily prevented and cured through today’s medical expertise. COVID-19, on the other hand, is invisible and potentially lethal. The call to social distancing and other types of isolation is due to how susceptible the general population is along with the great risk of being carriers to the vulnerable.

Be it the skin diseases listed in Torah, COVID-19, or all the other highly infectious and deadly diseases ravaging the world, we are sick. We are sick with a sickness far deadlier and just as, if not more, contagious than any of these. And whether we are close to or disconnected from those we love; we have been enduring a much greater isolation than called for by COVID-19. The pain of isolation we are experiencing due to the current crisis is deeply rooted in our alienation from God. And just like the Messiah was willing to break convention by touching (and healing) the infected, isolated people of his day, so he wants to touch us today. As he heals our uncleanness (sin) and restores us to God, we will no longer be isolated even if we are alone.