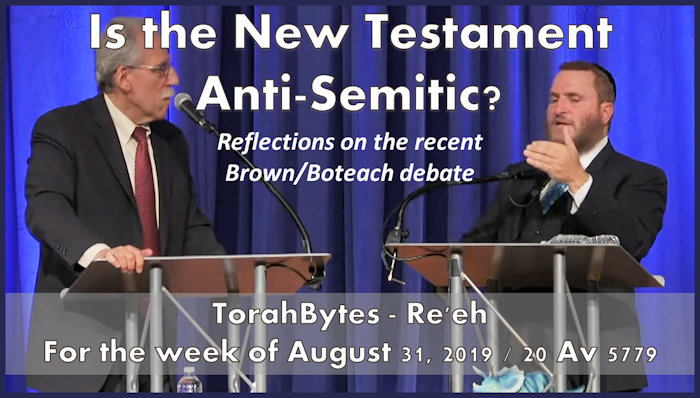 If a prophet or a dreamer of dreams arises among you and gives you a sign or a wonder, and the sign or wonder that he tells you comes to pass, and if he says, “Let us go after other gods, ” which you have not known, “and let us serve them,” you shall not listen to the words of that prophet or that dreamer of dreams. For the LORD your God is testing you, to know whether you love the LORD your God with all your heart and with all your soul. (D’varim/Deuteronomy 13:1-3)

I recently watched a passionate debate between Messianic Jewish scholar and talk show host, Dr. Michael Brown and celebrity rabbi Shmuley Boteach on the topic “Is the New Testament Antisemitic?” I was struck by the collegiality between the two in spite of their sharp differences, many of which predate these two men by approximately two thousand years. They consider each other friends, which I found a little hard to believe, given the level of emotion on Boteach’s part. To me, he seemed downright angry, especially in his opening remarks. Not that I blame him. Everyone agrees that the New Testament has been used to perpetrate anti-Semitism. I am angry about that too.

According to Boteach, however, certain New Testament passages have not simply been leveraged for nefarious purposes, they are intentionally anti-Jewish. While Boteach admirably seeks to reclaim Yeshua’s Jewishness, he does so by disassociating passages he deems to have been inserted many years after the events of the New Testament. He claims that that the later church community sought to distance itself from the Jews to the point that God is depicted as having finally and forever rejecting his covenant people. Therefore, any passage critical or deemed negatively inclined towards the Jewish people or the Jewish leadership in any way must be, according to Boteach, a later insertion.

Brown disagrees, claiming (rightfully so) that there is no substantial difference between Jewish critiques in the New Testament and those from the Hebrew Scriptures as spoken by Moses and the prophets. Boteach doesn’t deny that the prophets could be pretty harsh but isn’t offended by them because he has no doubt that they possessed a fundamental, unshakable love for their people. And this seems to be where the bone of contention actually lies. In spite of Brown’s attempt to establish otherwise, Boteach is not able to accept that the heart of New Testament critique of Israel is of the same essence as that of the Hebrew Scriptures.

Again, I can’t blame Boteach. In spite of his misrepresentation of New Testament intent, I have to accept that the vast majority of Christian interpretation of the New Covenant Writings through the generations until now is exactly how he describes it. And if that is what the critical passages are about, he is right to denounce them. Tragically, after two thousand years of anti-Jewish church sentiment, it is next to impossible to engage the words of the New Testament any other way.

What does any of this have to do with the passage I quoted from this week’s parsha (Torah reading portion)? The Torah is clear that no matter how impressive or convincing a prophet might be, if he seeks to turn the people of Israel unto other gods, they should not be listened to. As far as I can tell, Boteach never asserts that the Christian God is a false god. In fact, he would be happy to retain New Testament  passages that he understands to be in line with the Hebrew Scriptures. His bone of contention are the so-called anti-Semitic passages in spite of their similarity to messages given by the Hebrew prophets. The New Testament in its current form – in spite of elements that Boteach respects, affirms, and admires – misrepresents the true God by denying his ongoing relationship with the Jewish people. Therefore it should be rejected.

In my opinion, Brown does not adequately satisfy Boteach’s concern. At approximately the 101-minute mark, Brown gets Boteach’s attention as he begins to repudiate supersessionism, commonly referred to as “replacement theology,” rightly indicting this false teaching for being the basis of much of Christian anti-Semitism. Boteach reacts as if surprised by this, but the discussion is regrettably redirected by the moderator due to time. This is the crux of the issue. The New Testament needs no revision; it’s the church’s teaching that does. As long as the god of the church is a god who rejects Israel, people like Boteach are right to resist.

Video of the full debate is available here: