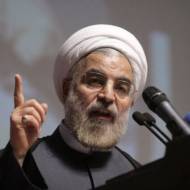 Rouhani says the Palestinians’ only course of action is the destruction of Israel, which his country supports.

Iranian President Hassan Rouhani declared that the Palestinians have only one path, which is the path of Jihad, Muslim holy war, against Israel.

“Today, the world public opinion is faced with this strong argument that the Zionist regime has never been after peace, and this argument and reasoning should be used to show that there is no way but jihad and resistance for the Palestinians against the usurper regime,” Rouhani said in a meeting with Ramadan Abdullah Mohammad Shallah, leader of Palestinian Islamic Jihad (PIJ) terror group, in Tehran on Tuesday, Iranian Fars news agency reported..

Claiming that Israel has in the past two decades manipulated the instability in the Middle East for its own gains, he said that Israel’s actions have “paved the ground for terrorists’ operation in the regional states, specially Afghanistan, Pakistan, Iraq, Syria, Lebanon and even North Africa to make them busy with internal security problems and forget the Palestinian issue.”

Rouhani was echoing the now-common anti-Semitic fable that Israel is behind the rise of the numerous Islamic terror groups operating around the globe.

Shallah thanked the Islamic Republic for supporting the Palestinian terror groups, saying that if not for Iran, it would be impossible for the Palestinians to continue with their anti-Israel activity.

In May, The Iranian government renewed its financial support for the Gaza-based Islamic Jihad terrorist group.

“The defense of Palestine amounts to a defense of Islam,” Shallah said in April during a visit in Tehran.

“The Arab states did not support the popular uprising in Palestine and will never support it since it contradicts their leaders’ agendas. Iran is the only state that supports the intifada and the martyrs’ families,” he added.

Iran’s Supreme Leader Ali Khamenei emphasized Iran’s support for the Palestinians during the meeting. “The necessity of countering the Zionist regime” is among Iran’s top priorities, he declared. “Therefore, defending the Palestinian cause is naturally enshrined in the nature of the Islamic Republic of Iran.”

Iran provides vast support to Palestinian terror organizations, including Hamas which rules Gaza, as part of its support of a global Islamic terror network.