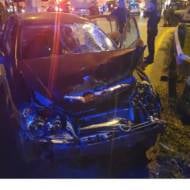 Just before six p.m. Tuesday, the hotline for Magen David Adom received a message about a pedestrian who was hit by a vehicle.

A 19-year-old soldier was moderately injured Tuesday evening after being hit by a vehicle near the community of Neve Tzuf, aka Halamish, in the Binyamin region of Samaria.

Just before six p.m. Tuesday, the hotline for Magen David Adom received a message about a pedestrian who was hit by a vehicle at the Halamish junction.

The victim, wounded in the lower limb, was treated by MDA staff and evacuated by military helicopter to Hadassah Ein Kerem Hospital.

The terrorist who carried out the attack was identified as Muhammad Nazmi Yassin, 29, from Bil’in in the PA territories. He was slightly injured.

“A terrorist came up to the spot where IDF personnel were providing security over the road in a vehicle and sped towards the soldiers,” said an IDF spokesperson. “The terrorist hit one of the fighters who was wounded in the leg and evacuated by military helicopter for medical treatment at the hospital.”

The terrorist was apprehended and will be transferred for further investigation by security forces.