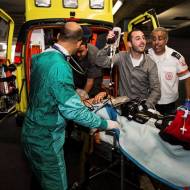 Though it seems that terror attacks are subsiding, the fact is that Israel faces numerous daily attempts by Palestinians to attack our soldiers and civilians throughout the country.

On Monday morning, a Palestinian stabbed and seriously wounded an IDF soldier at a junction near Hebron.

The soldier managed to shoot the terrorist dead before collapsing.

The victim, 19, was treated on the scene by medics for stab wounds in his neck and head, and was evacuated to Shaare Zedek hospital in critical and unstable condition.

He was immediately entered into an operating room for life-saving surgery, where doctors stabilized his condition.

The soldier was part of the forces brought in to Jerusalem and Judea and Samaria to boot the security in in wake of the weeks-long wave of Palestinian terror attacks.

The terrorists was identified by Palestinian sources as Raed Jaradat, 22, from a village near the site of the attack.

Later on in the day, a Palestinian terrorist attacked a group of soldiers securing the Cave of the Patriarchs in Hebron. The terrorists hit one of the soldiers’ protective vests and caused no injury.

He terrorist was shot and critically wounded, and was evacuated by IDF medics to a hospital in Jerusalem. According to Palestinian sources, the terrorist is Yousef Mohamed Saed al-Atrash, 19.

In the past five weeks, Palestinian terrorists have carried out 46 stabbings, four shootings and five vehicular attacks which have claimed the lives of 10 Israelis and left 128 wounded, 15 of them seriously.