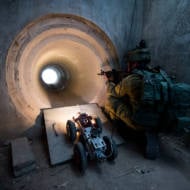 Sometimes, the best strategy to combat a threat is to face it head on – with double the force. Yahalom, the IDF Combat Engineering Corps special unit that specializes in underground warfare, does just that.

Since before 2014’s Operation Protective Edge, Hamas, the terror organization that rules the Gaza Strip, has been building numerous cross-border terror tunnels.The tunnels have changed the face of the battlefield by moving it underground. The Hamas’ objective: to infiltrate Israeli communities and attack citizens from the rear.

Hamas has succeeded in the past. During Operation Protective Edge, Hamas terrorists snuck through a terror tunnel and emerged near Nahal Oz, killing five soldiers at an IDF outpost, and attempting to kidnap one of the bodies.

These tunnels have even reached the civilian communities of Kibbutz Nir Am and Kibbutz Sufa, placing thousands of innocent lives in danger.

To counter this threat, the IDF is doubling the number of soldiers in the “Yahalom” unit, the elite commando unit of the IDF’s Combat Engineering Corps.

While combat soldiers in most units are trained in basic tunnel warfare, Yahalom specializes in discovering, clearing, and destroying terror tunnels.

As the threat of terror tunnels continues to grow, the role that Yahalom plays becomes even more vital. Although the entire unit deals with the tunnel threat, the unit is split into specialized companies. The “Yael” Company is the engineering reconnaissance force. “Sayfan” is trained to handle the threat of non-conventional weapons (WMD’s). There are two additional explosive ordinance disposal units, and “Samur,” which specializes in tunnel warfare.

“The main challenge of underground warfare is that the enemy has no above-ground signature, says Col. Yaron, the commander of the Yahalom unit. “The fact that the enemy is hidden and collecting intelligence is complicated and difficult.”

Hamas’ use of the tactic is no different. “Hamas views warfare underground just as it would above ground, utilizing defense, offense, and retreat. They even destroy the foundations of their terror tunnels to harm the IDF soldiers inside, similar to the tactic used in Vietnam.”

Lt. Hezi has first hand experience fighting inside of Hamas’s terror tunnels from Operation Protective Edge. “No two tunnels are the same. The first person to enter the tunnel has to improvise,” he explains. “This is exactly what we train for – to be prepared for any situation, whether it be a terrorist or an explosive. When you see the inside of these terror tunnels – that’s when you suddenly understand how big of a threat we face.”