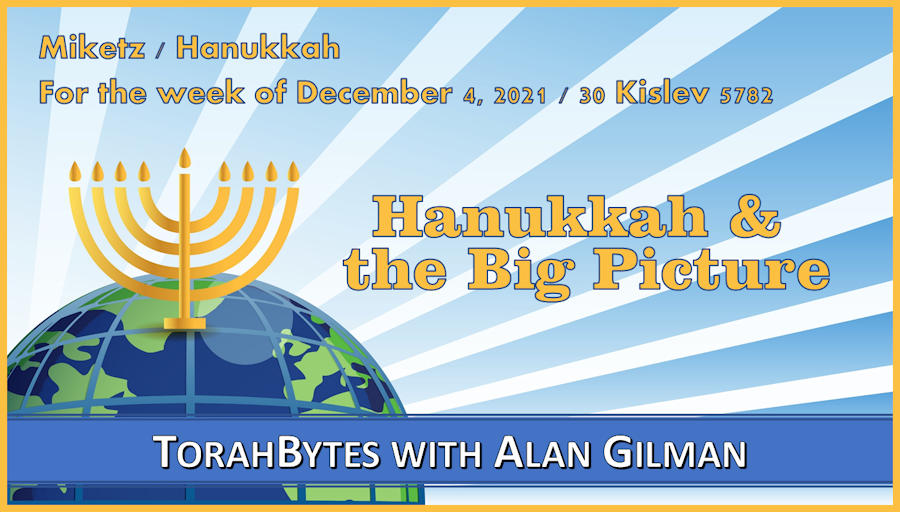 And Pharaoh said to his servants, “Can we find a man like this, in whom is the Spirit of God?” Then Pharaoh said to Joseph, “Since God has shown you all this, there is none so discerning and wise as you are. You shall be over my house, and all my people shall order themselves as you command. Only as regards the throne will I be greater than you.” (Bereshit/Genesis 41:38-40)

It’s Hanukkah this week! Hanukkah commemorates the triumph of the small Jewish army over the powerful Seleucids in the year 165 BC under the tyrannical reign of Antiochus Epiphanes. Antiochus sought to consolidate his rule by imposing Greek culture and religion upon his diverse and expansive region, including the land of Israel. The temple in Jerusalem was desecrated by pagan worship, including the presence of a statue of Zeus and the sacrificing of a pig on the altar. The recapturing and cleansing of the temple along with the rededication of the altar was marked by a festival modelled after Sukkot (English: Tabernacles or Booths). Battles against the Seleucids continued until independence for Israel was re-established for the first time since the Babylonian captivity.

A key component of the circumstances that led to the first Hanukkah is that Antiochus’s assimilation plan had been fairly successful in Israel. In First Maccabees, the primary historical source for Hanukkah, we read,

In those days certain renegades came out from Israel and misled many, saying, ‘Let us go and make a covenant with the Gentiles around us, for since we separated from them many disasters have come upon us.’ This proposal pleased them, and some of the people eagerly went to the king, who authorized them to observe the ordinances of the Gentiles. So they built a gymnasium in Jerusalem, according to Gentile custom, and removed the marks of circumcision, and abandoned the holy covenant. They joined with the Gentiles and sold themselves to do evil. (1 Maccabees 1:11-15 [Jubilee Bible 2000]).

It is difficult to know exactly what “for since we separated from them many disasters have come upon us.” is referring to, but it is likely a general critique, or should I say, rejection, of God’s choosing of the Jewish people. God established the people of Israel as a distinct nation. To ensure that distinction, he deemed it necessary to make them different from other nations.

It’s hard to be different. It creates suspicion. It makes interaction awkward, if not impossible. And, at times, it results in severe persecution and conflict. Eventually, a significant portion of the people couldn’t take it anymore. And so, they not only embraced the prevailing culture of their day, they also submitted to a medical procedure to hide their circumcision. All so that they would no longer be considered a separate people.

It is interesting that Hanukkah occurs in the midst of the story of Joseph in the weekly Torah readings. Much of Joseph’s suffering was due to his being different. It began with his father’s preferential treatment, followed by God’s unusual dream impartation. His brother’s hatred of him for these things thrust him into slavery and years of imprisonment. Yet, through it all, Joseph remained faithful to God, which kept him from the bitterness that would have undermined his calling.

The renegades, as they are called in First Maccabees, didn’t follow Joseph’s example. They lost sight of who they really were and were willing to give it all up. I in no way want to belittle their suffering. I don’t know what I would have done in their situation. But one thing I do know. They were not seeing the whole picture. Unlike Joseph, the only thing they took into account was their suffering. The “many disasters” had indeed happened to Israel, but they had neglected to remember their calling to be a blessing to the whole world (see Genesis 12:3; Galatians 3:28). The failure to retain their higher purpose made them susceptible to assimilation. As a result, they could no longer see how deceptive the lure of the prevailing culture was. The short-term benefits may have seemed appealing, but the long-term results would be disastrous.

It’s only when we keep the big picture of God’s plan in mind that we can endure the difficulties along the way.