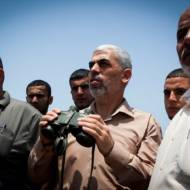 Iran reportedly pledged all of Iran’s “capabilities and potential” to assist Hamas in “the battle for the defense of Jerusalem.”

Quoting Soleimani, who, he said, spoke with him by phone, Hamas leader Yahye Sinwar said that the general assured him, “All our of capabilities and potential are at your disposal in the battle for the defense of Jerusalem.”

Sinwar’s recollection of the phone call was broadcast in the pro-Iranian Lebanese news outlet al-Mayadeen, along with remarks he made on Thursday to a group of young men and activists.

Soleimani, according to Sinwar, added, “Iran, the Revolutionary Guards and Quds Force stand with all they have with our people in order to defend Jerusalem so that Jerusalem will endure as the capital of the state of Palestine.”

Sinwar, who said that he had met Soleimani five years ago, said that Soleimani was in touch with the leaders of Hamas and Palestinian Islamic Jihad.

Hamas, which has complete political and military control over Gaza, has been trying to mobilize violence against Israel since President Donald Trump recognized of Jerusalem as Israel’s capital and declared his intent to move the United States embassy there earlier this month.

Though the relationship between Hamas and Iran had suffered from friction in recent years over Tehran’s support of the regime of Syrian President Bashar al-Assad, in recent months relations between the two have markedly improved.

A delegation from Hamas attended the inauguration of Iranian President Hassan Rouhani’s second term in August. At that time, senior officials of the terrorist group announced that it would “turn a new page” in its relationship with the IRGC. Later that month, Sinwar himself announced that Hamas had repaired its rift with Iran.

In September, Nadav Argaman, the head of Israel’s Shin Bet, said that Hamas was intensifying its strategic ties with Iran and its allies, including Hezbollah.