When you drive into Israel’s Sha’ar HaNegev Region in the northwestern Negev, the fields are burnt and black. The trees are broken, and the smell of acrid smoke stings the eyes and nose.

“It is a very upsetting view,” said Zeev Meidan, general manager of the Israeli Honey Council.

Meidan, who in the past was employed as a beekeeper at the area’s Kibbutz Yad Mordechai, has been spending extra time in the southern district to support the region’s honey farmers, many of whom have been the target of arson attacks by Hamas.

He said fires in the Gaza periphery caused by aerial arson attacks launched by flammable kites and helium balloons have caused millions of shekels worth of damage to the beehives of Kibbutz Erez and Yad Mordechai in the period just before Rosh Hashanah, the height of the honey harvest. On average, Meidan said, the hives would be producing as much as 50 kilograms of honey each this season.

“After many months of labor, we were supposed to collect the honey from our hives,” said Boaz Kanot, chairman of the Israel Beekeepers Association. “The recent fires have burned dozens of beehives full of honey just before it was meant to be packaged and distributed. This is a huge loss to the industry in general and the beekeepers specifically.”

Many beekeepers rely on income from this season to support themselves throughout the year, explained Yitzchak “Hakale” Amitai, manager of Kibbutz Erez’s building and infrastructure. He said the beekeepers provide taxes from the profits to the kibbutz, which will also suffer a financial blow.

The government has committed to help offset the loss to individual farmers, but only about half of the funds have been transferred thus far, said Meidan.

Amitai said the beehives are not located inside the kibbutzim, but in open land all around their periphery. He explained that in addition to the bees themselves being scorched, when the fields are burnt then any remaining bees cannot produce honey because there are no flowers on which to graze.

“Flowers do not grow overnight, so in the near future there will not be enough flowers to make honey,” he said. Fewer bees also mean “that they will not be able to pollinate the fields.”

‘Nearly all the grove was burnt’

According to Meidan, the country produces around 3,500 tons of honey per year, of which little or none is exported. The country imports about 1,000 tons of honey, which together with local production just meets the needs of Israelis, especially around the holidays. He said Israel’s northern farmers and imports this year should make up for the loss of the honey in the Sha’ar HaNegev Region, and honey prices should remain stable through the High Holidays and Sukkot.

Meidan said Israel has around 120,000 beehives, including 5,000 located near the border with Gaza. Of those 5,000, some 200 hives have been destroyed and thousands more indirectly impacted by the fires. And while annual plants can be planted and regrown with little impact on next year’s honey season, he explained, other varietals, like eucalyptus trees, cannot be grown in a year. As such, there will be long-term impact on the industry that has yet to be determined.

Additionally, Amitai said the situation has taken an emotional blow on the beekeepers who worked all year only to watch their efforts undone in a blaze.

“It is terrible to watch your hives burn up alongside eucalyptus trees, flowers and grazing land,” said beekeeper Ido Eden. “Nearly all the grove was burnt, and with it, my hives. We are talking about eight dunams of land with 32 hives. I was planning to go on vacation with my family, but now I’m not so sure. It just feels terrible.” 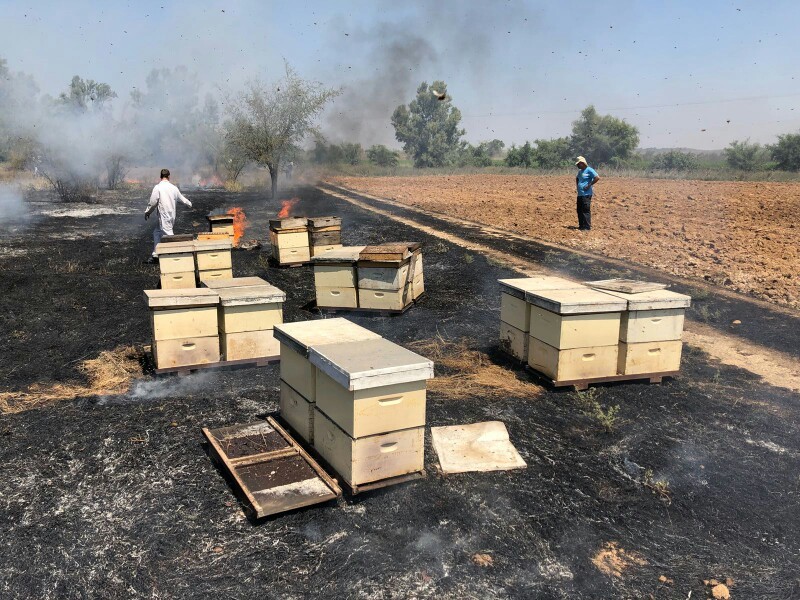 ‘It is not only hurting the Jews’

“I don’t know what to say … you just look out at the fields and see fire—another kite, another balloon—it’s crazy,” said Ben-Aris. “It doesn’t make sense.”

Ben-Aris lives in Kibbutz Erez. He said there are a minimum of six fires per week, and sometimes as many as three a day. The best way to contain them is to arrive on the scene fast. The kibbutz has put together an emergency response firefighting team with equipment purchased largely from donations made by the MetroWest New Jersey Federation. He said there is a constant need to replenish items like fire hoses, which are quickly worn down from the fires.

“There were days that teams would go out to extinguish the fire and holes in the hoses would have water spraying everywhere,” Ben-Aris said. “These are firefighters with day jobs, and when it happens on Shabbat, they have to leave their families three times. It’s very hot right now, and these fires are so hot, too.”

Retirees from across the country have been volunteering in the area, sitting in watch towers to monitor for aerial attacks and inform the firefighting response team.

Strikingly, even as their fields are destroyed and fires sting the production of the area’s sweet honey, residents and leadership alike say they have empathy for the plight of the Gazans and do not want to go to war with Hamas. 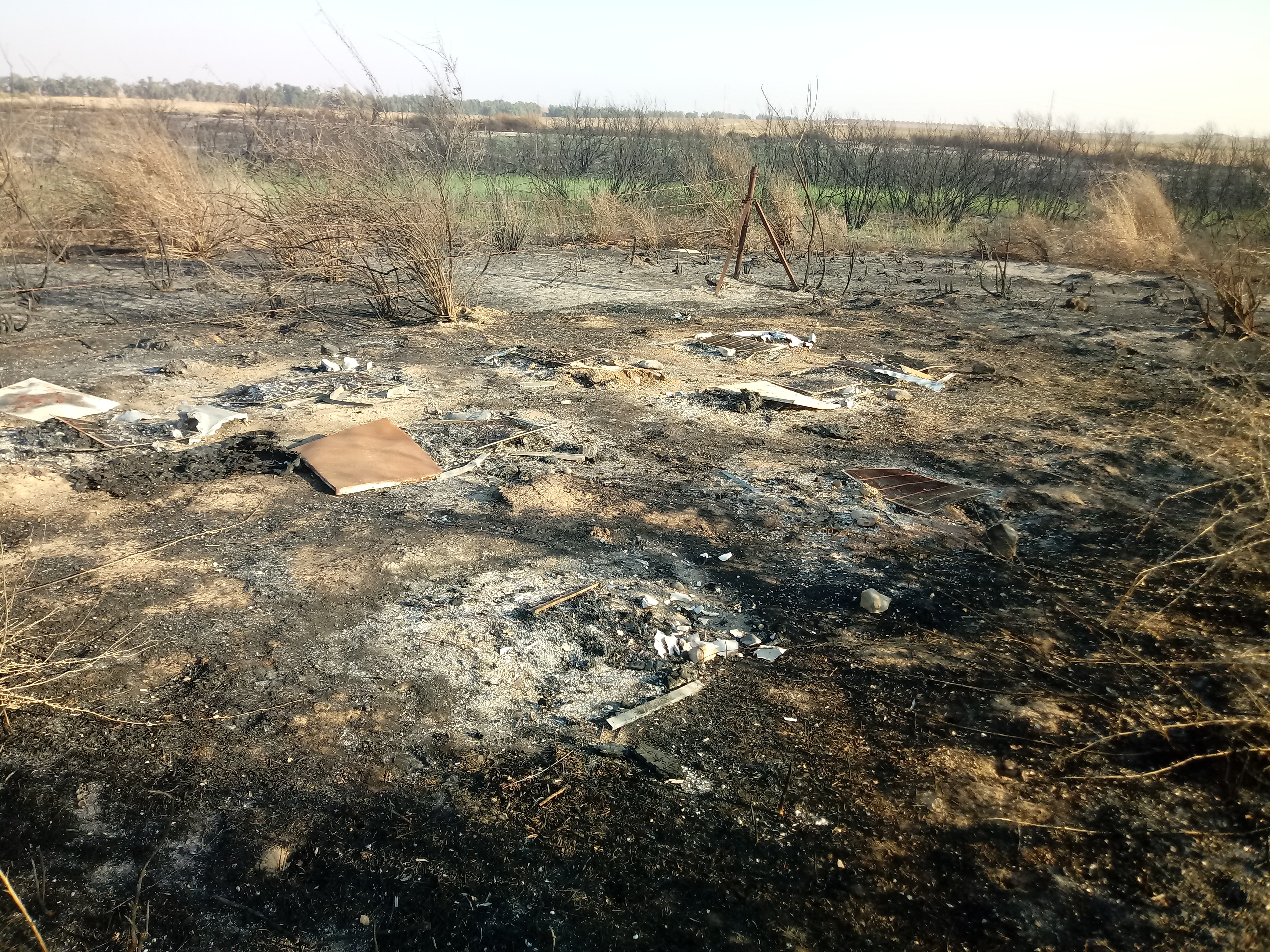 The charred remains of a honey farm in southern Israel due to incendiary kites from the Gaza Strip. Credit: Israeli Honey Council.

Sha’ar HaNegev Regional Council Mayor Alon Shuster told JNS that arson is not something new for the region. Rather, there were rounds of fires set by Gaza activists near the border for years. The big shift now is that these fires are reaching further into the region, propelled by kites and balloons. While he said that the results are tragic economically, emotionally and agriculturally, “we are lucky none of the burning kites have put people in danger.”

Shuster said he doesn’t want a military solution to be the only solution.

“A war will just temporarily stop the fires, but it will not stop Hamas from attacking us again,” he said. “Of course, Hamas is a terrible partner for negotiations. … But we must move to a situation where Israel opens dialogue with Hamas—for the people of Israel and Gaza. While this is hard on us, the people in Gaza are suffering in ways we cannot even imagine or describe.”

Meidan added that “Hamas should know that not only does the arson not help them, it is not only hurting the Jews. It is bad for nature and killing bees—innocent insects that don’t deserve to die.” And he believes the people of the Sha’ar HaNegev Region are resilient.

Ben-Aris said the first flowers that pop up as the land starts to recuperate are striking red anemones, which he said will ignite the fields in in vibrant color.

“It will be very pretty,” he said. “This new life—that is the message I would send back to Hamas.”