Fear Grows that Bible will become Illegal in Scotland

Scotland’s new Hate Crime and Public Order Bill has been proposed by the Scottish National party to repeal the obsolete outlawing of blasphemy. However it appears to inadvertently translate into new sorts of “anti-blasphemy” laws. One of the more controversial sections of the bill includes the crime of ‘stirring up hatred’, which criminalizes anyone that ‘behaves in a threatening, abusive or insulting manner’ or ‘communicates threatening, abusive or insulting material to another person’.

The bill even criminalizes the possession of ‘inflammatory’ material. This has caused fear among senior Catholic bishops that possession of the Bible could place Scots behind bars reports the Spectator. The news outlet worries that passages like Leviticus 20:13 which calls for the death penalty for gay people will fall under that category:

If a man lies with a male as one lies with a woman, the two of them have done an abhorrent thing; they shall be put to death (Leviticus 20:13)

Humza Yousaf, the SNP’s Justice Secretary said in a statement that the bill ‘does not undermine free speech’, but rather ‘protects it’. However the bill in it’s current form could see those found guilty of ‘insulting’ behavior with a seven-year jail sentence. 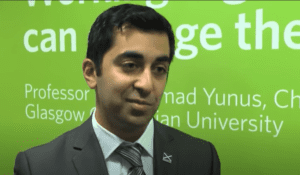 ‘The Bill does not seek to stifle criticism or rigorous debate in any way,’ Yousaf wrote. ‘People will still be able to express controversial, challenging or even offensive views as long as this is not done in a threatening or abusive way that is intended to stir up hatred or likely to stir up hatred.’

But Scottish columnist Andrew Doyle is concerned about how such vague legislation will be interpreted – especially since in the UK, the website for Police Scotland defines an incident or crime as ‘hateful’ according to the perception of the ‘victim.’