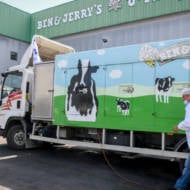 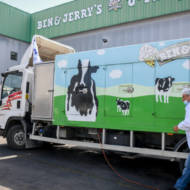 Avi Zinger says Ben & Jerry’s and its parent company, Unilever, forced him into an impossible choice.

Avi Zinger was so upset after Ben & Jerry’s pulled the rug out from under him that he never picked up the phone to speak with them. Instead, he’s taking them, and their parent company Unilever, to a U.S. district court.

The longtime Israeli manufacturer and distributor of the Vermont-based ice cream company’s products wants his license agreement renewed, and damages for the losses he’s suffered since Ben & Jerry’s succumbed to the Boycott, Divestment and Sanctions movement, and refused to renew its agreement with Zinger unless he broke Israeli and U.S. law by pulling his products from both Israeli and Palestinian customers in Judea and Samaria.

“There was no discussion, but not because they didn’t answer my calls. It’s because I never called them. I guess I took it so hard. If they could do it to me, after so many years of such a fantastic relationship, so what should I say? Why should I call?” Zinger told JNS, in response to a question regarding whether there was any attempt to negotiate with Unilever or Ben & Jerry’s before the matter was taken to court.

Last July, Ben & Jerry’s announced it would no longer allow its products to be sold in “occupied Palestinian territory” and would not renew its unique licensing arrangement with Zinger, which had run in one form or another for 34 years, beyond its current term, which expires at the end of 2022.

Ben & Jerry’s, which has its own quasi-independent board under the terms of its 2000 purchase by Unilever, said it was “inconsistent with our values” for its product to be sold in what it deemed to be “occupied Palestinian territory.”

While Ben & Jerry’s said it would seek an alternate arrangement for distribution in sovereign Israel going forward, its statement had run afoul of Israeli law, and its brand became instantly tarnished, likely burning its worth in the Israeli market. Sales at supermarket chains, IDF bases and ice cream shops have all plummeted, according to data in the lawsuit, despite an initial push by some to buy Ben & Jerry’s in support of Zinger’s stance and predicament.

“The double standard is that Unilever themselves are selling their product, their ice cream in the same territories in the West Bank [Judea and Samaria], in what they called occupied territory, in east Jerusalem. So, how come Unilever is selling the product and are asking me to stop selling?

Since Ben & Jerry’s announcement, the states of New Jersey, New York, Arizona, Florida, Illinois and Texas have acted on their existing anti-boycott laws and divested from Unilever, withdrawing investments and holdings worth upwards of $1 billion.

Unilever’s stock plunged more than 20% during the six months following Ben & Jerry’s announcement, and the company posted a $26 billion loss in January. Unilever has failed to substantially respond to any of the state actions, instead choosing to send out a boilerplate response to state agencies detailing its stance and refusing further contact.

Unilever CEO Alan Jope said on a conference call with journalists last month that the board of Ben & Jerry’s aims to work out a “new arrangement” for sales in Israel before the end of the year, without going into specifics.

The two co-founders of Ben & Jerry’s were subjected to widespread ridicule following a TV interview last October in which they struggled to articulate why their social mission standards apply to Israel and not in other markets.

Couldn’t Look Employees in the Eyes

It begs the question of why Zinger still wants the license renewed at all.

“As an Israeli, I am looking at this and saying, ‘Wait a minute.’ All the high-tech companies, the global companies, are here in Israel. If BDS will go after and put some pressure on these companies and will make the Israeli branch or licensee stop selling or get the company to leave the country altogether, or for a branch to stop servicing part of Israel, what will happen? So, that’s why. So many people in Israel are behind me,” Zinger said.

The lawsuit reveals claims that other ice cream manufacturers, including one within Unilever’s portfolio, have poached Zinger’s business. It also outlines how uncertainties felt by his employees, including Palestinians and African refugees, have affected his bottom line and ability to operate. Zinger claims he’s had difficulty obtaining financing from banks as a result of the plummeting sales and unsure future of his contract.

“We are responsible for almost 50% of the sales of home packaging in Israel, meaning almost every second person that buys ice cream and brings it home buys Ben & Jerry’s, which is very unusual.

“We’ve done a great job and I’ve done nothing wrong here. I’m fighting not only for me, but my suppliers, who have been with me for so many years. We use fresh cream and fresh milk, eggs and many other ingredients from the surrounding area. It’s for my employees, who have been with me for so long that a 10-year employee is considered junior here. Now, they have to think about finding another job.

“When the statement [of licensing termination] came out, I couldn’t look them in their eyes. The company that we love and we work for, after so many years, they’re just dumping us. So, now I have to go one step up and to sue them for what they did,” said Zinger.

Among the interesting claims in the lawsuit, Zinger says that he acquiesced to the demands of Ben & Jerry’s about sales in Judea and Samaria by suggesting that a Palestinian distributor could handle that operation. But Zinger said that when Ben & Jerry’s learned that the proposed distributor wanted to expand sales in the territories, the ice cream company rejected the proposal.

Zinger said he also proposed to change the language in a proposed renewal contract, replacing “the State of Israel, including the occupied territories under sole Israeli control” to “the state of Israel,” with a wink-and-nod agreement with Ben & Jerry’s management that the change would be cosmetic in nature, solely to appease boycott movement activists.

Zinger says he was provided with a copy of the amendment in writing Ben & Jerry’s management, even as a complete renewal agreement never materialized.

The lawsuit was filed in the U.S. District Court of New Jersey, where Unilever’s U.S. branch is headquartered. Zinger is asking the court for an injunction that would enable his company, American Quality Products, to continue manufacturing and distributing Ben & Jerry’s products in all of Israel.

Zinger is also seeking unspecified damages for breach of contract, wrongful termination and breach of the implied covenant of good faith and fair dealing, claiming that the Ben & Jerry’s announcement coming a year-and-a-half prior to the end of their arrangement with Zinger has kept Zinger from enjoying the benefits of the deal.