“The answer to your question is simple. Jesus could not die for anyone’s sins, whether they were committed intentionally or accidentally. To begin with, the Jewish people were strictly prohibited from offering human sacrifices under any circumstances. There is not one place throughout the entire corpus of the Jewish Scriptures where human sacrifices are condoned. In fact, over and over again, the Bible warns the Jewish people that it is a grave sin to bring a human being as a sacrifice. In the Book of Leviticus, only distinct species of animals are permitted for use in blood sacrifices,” Rabbi Tovia Singer, responding to the question “Could Jesus’ Death Atone for Any Kind of Sin?”, from:  http://outreachjudaism.org/jesus-death-atone-for-sin/ 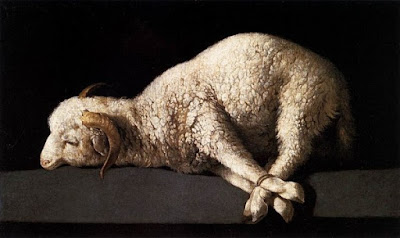 First, let’s look at Scripture.  We see in Isaiah 53 and Zechariah 12:10 that the Messiah had to be like a lamb sacrifice:

“1 Who hath believed our report? and to whom is the arm of the Lord revealed?
2 For he shall grow up before him as a tender plant, and as a root out of a dry ground: he hath no form nor comeliness; and when we shall see him, there is no beauty that we should desire him.
3 He is despised and rejected of men; a man of sorrows, and acquainted with grief: and we hid as it were our faces from him; he was despised, and we esteemed him not.
4 Surely he hath borne our griefs, and carried our sorrows: yet we did esteem him stricken, smitten of God, and afflicted.
5 But he was wounded for our transgressions, he was bruised for our iniquities: the chastisement of our peace was upon him; and with his stripes we are healed.
6 All we like sheep have gone astray; we have turned every one to his own way; and theLord hath laid on him the iniquity of us all.
7 He was oppressed, and he was afflicted, yet he opened not his mouth: he is brought as a lamb to the slaughter, and as a sheep before her shearers is dumb, so he openeth not his mouth.
8 He was taken from prison and from judgment: and who shall declare his generation? for he was cut off out of the land of the living: for the transgression of my people was he stricken.
9 And he made his grave with the wicked, and with the rich in his death; because he had done no violence, neither was any deceit in his mouth.
10 Yet it pleased the Lord to bruise him; he hath put him to grief: when thou shalt make his soul an offering for sin, he shall see his seed, he shall prolong his days, and the pleasure of the Lord shall prosper in his hand.
11 He shall see of the travail of his soul, and shall be satisfied: by his knowledge shall my righteous servant justify many; for he shall bear their iniquities.
12 Therefore will I divide him a portion with the great, and he shall divide the spoil with the strong; because he hath poured out his soul unto death: and he was numbered with the transgressors; and he bare the sin of many, and made intercession for the transgressors,” Isaiah 53

Next, let’s look at what the writings of Rabbinic Judaism have to say about the Messiah in the above passages.

“The fifth house [in the heavenly Paradise] is built of onyx and jasper stones, and inlaid stones, and silver and gold, and good pure gold.  And round it are rivers of balsam, and before its door flows the River Gihon.  And [it has] a canopy of all trees of incense and good scent.  And [in it are] beds of gold and silver, and embroidered garments.  And there sit Messiah ben David and Elijah and Messiah ben Ephraim.  And there is a canopy of incense trees as in the Sanctuary which Moses made in the desert.  And all its vessels and pillars are of silver, its covering is gold, its seat is purple.  And in it is Messiah ben David who loves Jerusalem.  Elijah of blessed memory takes hold of his head, places it in his lap and holds it, and says to him:  ‘Endure the sufferings and the sentence of your Master who makes you suffer because of the sin of Israel.’  And thus it is written:  He was wounded because of our transgressions, he was crushed because of our iniquities (Isa. 53:5)–until the time when the end comes.
And every Monday and Thursday, and every Sabbath and holiday, the Fathers of the World [i.e. Abraham, Isaac, and Jacob] and Moses and Aaron, David and Solomon, and the prophets, and the pious come and visit him, and weep with him.  And he weeps with them.  And they give him thanks and say to him:  ‘Endure the sentence of your Master, for the end is near to come, and the chains which are on your neck will be broken, and you will go out into freedom,’
And even Korah and all his company entreat him every Wednesday and say to him:  ‘How long until the miraculous end?  When will you bring us back to life and bring us up again from the depths of the earth (Ps. 71:20)?
And he says to them:  ‘Go and ask the Fathers of the World.’  And they are ashamed and return to their place.’ (Mid. Konen, BhM 2:29-30)” Raphael Patai, The Messiah Texts, pgs 114-115

“The souls which are in the Garden of Eden of Below roam about on every New Moon and Sabbath, and go to that place which is called Walls of Jerusalem, where there are many officers and detachments which watch-over those walls….And they go to that place, but do not enter it until they are purified.  And there they prostrate themselves, and enjoy that radiance, and then return to the Garden.  [And again] they go forth from there and roam about in the world, and they see the bodies of the sinful suffering their punishment….And then they [continue to] roam and view those afflicted with sufferings and disease, and those who suffer for the Oneness of their Master, and then they return and tell [all this] to the Messiah.  In the hour in which they tell the Messiah about the sufferings of Israel in exile, and [about] the sinful among them who seek not the knowledge of their Master, the Messiah lifts up his voice and weeps over those sinful among them.  This is what is written:  He was wounded because of our transgressions, he was crushed because of our iniquities (Isa. 53:5).  Those souls then return to their places.  In the Garden of Eden there is a hall which is called the Hall of the Sons of Illness.  The Messiah enters that hall and summons all the diseases and all the pains and all the sufferings of Israel that they should come upon him, and all of them come upon him.  And would he not thus bring ease to Israel and take their sufferings upon himself, no man could endure the sufferings Israel has to undergo because they neglected the Tora…As long as Israel dwelt in the Holy Land, the rituals and the sacrifices they performed [in the Temple] removed all those diseases from the world, now the Messiah removes them from the children of the world….’ (Zohar 2:212a)” Raphael Patai, The Messiah Texts, pgs 115-116

Again and again in Midrash we read that Messiah ben Yoseph died for the sins of Israel (“…their sins will in the future force you into an iron yoke…” Pes. Rab. & “…’Ephraim, our True Messiah!…Do you want that our children should enjoy the happiness that this happiness the Holy One, blessed be He, allotted to Israel, or perhaps, because of the great sufferings that have come upon you on their account, and because they imprisoned you in the jailhouse, your mind is not reconciled with them?'” Pes. Rab. ch 36).
And, lastly, we should note that the Rabbis believed that this Messiah ben Joseph, the Messiah who had to die for the sins of Israel, is the same Messiah depicted in Zechariah 12:10, the Messiah of whom G-d says, “they shall look upon me whom they have pierced, and they shall mourn for him, as one mourneth for his only son…” (see note below).
In conclusion, it seems that Singer is wrong to argue that the Messiah did not need to die for the sins of Israel.  Scripture tells us that the Messiah did indeed have to die for the sins of Israel.  Furthermore, we can see from the writings of Rabbinic Judaism that the Rabbis understood this as well.
Shalom,
Peter
NOTES SECTION:
“Talmud – Mas. Sukkah 52a And the land shall mourn, every family apart; the family of the house of David apart, and their wives apart.1 Is it not, they said, an a fortiori argument? If in the future2 when they will be engaged in mourning and the Evil Inclination will have no power over them,3 the Torah4 nevertheless says, men separately and women separately, how much more so now5 when they are engaged in rejoicing and the Evil Inclination has sway over them.6 What is the cause of the mourning [mentioned in the last cited verse]?1 — R. Dosa and the Rabbis differ on the point. One explained, The cause is the slaying of Messiah the son of Joseph,7 and the other explained, The cause is the slaying of the Evil Inclination. It is well according to him who explains that the cause is the slaying of Messiah the son of Joseph, since that well agrees with the Scriptural verse, And they shall look upon me because they have thrust him through, and they shall mourn for him as one mourneth for his only son;8 but according to him who explains the cause to be the slaying of the Evil Inclination, is this [it may be objected] an occasion for mourning? Is it not rather an occasion for rejoicing? Why then should they weep? — [The explanation is] as R. Judah expounded: In the time to come9 the Holy One, blessed be He, will bring the Evil Inclination and slay it in the presence of the righteous and the wicked. To the righteous it will have the appearance of a towering hill, and to the wicked it will have the appearance of a hair thread. Both the former and the latter will weep; the righteous will weep saying, ‘How were we able to overcome such a towering hill!’ The wicked also will weep saying, ‘How is it that we were unable to conquer this hair thread!’ And the Holy One, blessed be He, will also marvel together with them, as it is said, Thus saith the Lord of Hosts, If it be marvellous in the eyes of the remnant of this people in those days, it shall10 also be marvellous in My eyes.11 R. Assi stated, The Evil Inclination is at first like the thread of a spider, but ultimately12 becomes like cart ropes, as it is said, Woe unto them that draw iniquity with cords of vanity, and sin as it were with a cart-rope.13 Our Rabbis taught, The Holy One, blessed be He, will say to the Messiah, the son of David (May he reveal himself speedily in our days!), ‘Ask of me anything, and I will give it to thee’, as it is said, I will tell of the decree etc. this day have I begotten thee, ask of me and I will give the nations for thy inheritance.14 But when he will see that the Messiah the son of Joseph is slain, he will say to Him, ‘Lord of the Universe, I ask of Thee only the gift of life’.’As to life’, He would answer him, ‘Your father David has already prophesied this concerning you’, as it is said, He asked life of thee, thou gavest it him, [even length of days for ever and ever].15” from: http://halakhah.com/pdf/moed/Sukkah.pdf