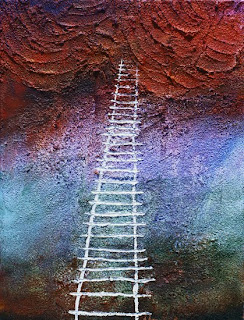 Parashat Vayetzei begins with one of the most mysterious passages in the Torah. While Jacob was fleeing from his brother Esav, he stopped at a certain place to spend the night. After laying his head down on a rock and falling asleep, he had a dream. In Ya’akov’s dream, he saw a vision of a ladder that reached from the ground into heaven, and angels were ascending and descending upon it. Additionally G-d spoke to him, and relayed the promise of giving the land of Israel to him and his descendants, that He would multiply Jacob’s offspring, and that through his descendants, all the peoples of the earth would be blessed. G-d concluded by reassuring Jacob that He would not abandon him, for He had made a promise with him.

Throughout Jewish history, commentators have argued over the exact meaning of Jacob’s vision. Interestingly, the vagueness of the Hebrew does not help in understanding it any better. For instance, the phrase, “and the angels of HaShem were ascending and descending upon it” could also be rendered as “the angels of HaShem ascended and descended upon him.”

Based on this reading of the text, Jacob represents the medium by which G-d’s blessings are imparted into the world, and whose descendant’s (the twelve tribes who also are birthed in this parasha) further embody G-d’s blessings in the earth. The story of the sulam Ya’akov, of Jacob’s ladder, is a reminder of G-d’s direct interaction into the affairs of humanity.

Lastly, the parasha also begins and ends with with the mentioning of angels. At the beginning of the portion we read about the angels who ascend and descend upon the ladder in the dream, and at the very end of the portion, of the angels who come to meet Ya’akov after he left his father-in-law, Lavan (Gen. 32:2-3). It is interesting to note this specific mentioning of angels both at the beginning and the end of this parasha. For it additionally shows G-d’s involvement in the trials that are attested to in-between these angelic encounters.

The first mention is almost a “changing of the guard,” if you will. The description is that the angels first ascend, and then descend. The seemingly opposite of what we would expect. This leads us to believe that there were angelic escorts with Ya’akov as he fled his home. In the dream, Jacob was given the ability to see those angels who were with him ascend back into heaven, as a new host of heaven descend to meet him for the next stage of his journey. For the journey ahead would be full of trials as he is tricked and taken advantage of repeatedly by Lavan. The new angelic escorts would be with Ya’akov to teach him what he needed to be a Patriarch of Israel, and to turn what Lavan meant for evil, into blessings for Ya’akov and his family.

As a patriarch of the Jewish people, Ya’akov served as an embodiment, and vehicle, through which G-d’s blessings would be imparted into the earth. This interpretation is further related and clarified in the Brit Chadashah. In the gospel of John, Yeshua speaks to a man named Natanel, and says to him:

“Yes indeed! I tell you that you will see heaven opened up and the angels of G-d ascending and descending on the Son of Man (John 1:51).”

In this passage Yeshua clarifies that now he would be the embodiment and vehicle of G-d’s work in the earth. That through him is access to the heavenly realms.