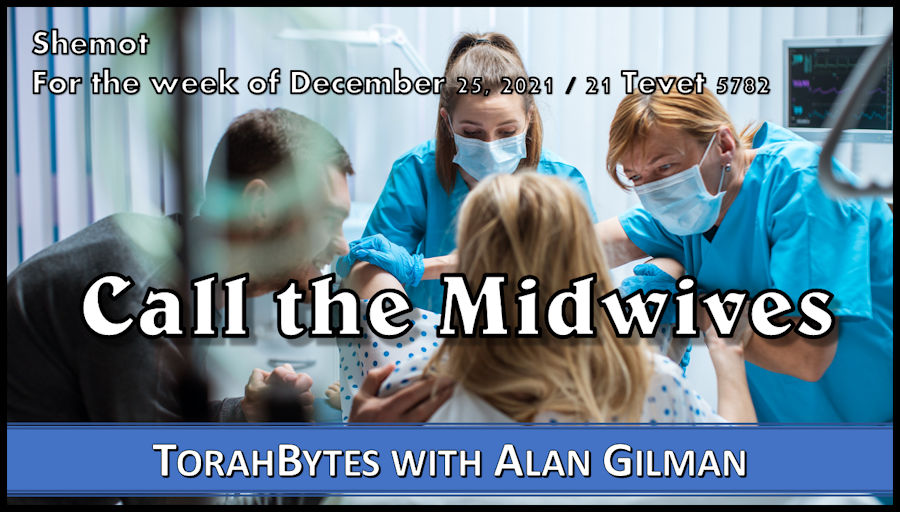 So the king of Egypt called the midwives and said to them, “Why have you done this, and let the male children live?” (Shemot/Exodus 1:18)

The Bible teaches that godly people should respect authority as we read here:

Let every person be subject to the governing authorities. For there is no authority except from God, and those that exist have been instituted by God. Therefore whoever resists the authorities resists what God has appointed, and those who resist will incur judgment (Romans 13:1-2).

If this is so, then what’s with the midwives in this week’s parsha (weekly Torah reading portion)? To appreciate what’s going on here, let’s look at more of the context than my brief quote at the beginning:

Then the king of Egypt said to the Hebrew midwives, one of whom was named Shiphrah and the other Puah, “When you serve as midwife to the Hebrew women and see them on the birthstool, if it is a son, you shall kill him, but if it is a daughter, she shall live.” But the midwives feared God and did not do as the king of Egypt commanded them, but let the male children live. So the king of Egypt called the midwives and said to them, “Why have you done this, and let the male children live?” The midwives said to Pharaoh, “Because the Hebrew women are not like the Egyptian women, for they are vigorous and give birth before the midwife comes to them.” So God dealt well with the midwives. And the people multiplied and grew very strong. And because the midwives feared God, he gave them families. (Shemot/Exodus 1:15-21)

The Hebrew midwives clearly disobeyed the governing authority in this case. The king’s edict was clear. They were to murder the male babies, but they didn’t. Not only did they not follow the law, they concocted a cover up, claiming the Hebrew women gave birth before they got there.

Disobeying government? Lying to the authorities? How terrible. Since when does the end justify the means? Who would defend such a thing? God would. He blessed the midwives for what they did. And why did they do what they did? They feared God. Because they put God ahead of human authority, they not only saved lives, God favored them.

Then what’s with Romans 13? Is this a case of some sort of superior New Testament morality? I myself would not normally assume such a thing, since the person who wrote Romans, also wrote:

All Scripture is breathed out by God and profitable for teaching, for reproof, for correction, and for training in righteousness, that the man of God may be complete, equipped for every good work. (2 Timothy 3:16-17)

New Covenant morality and spirituality is built upon a strong Hebrew Scripture foundation. There are some developments that occur due to the coming of the Messiah, but general morality doesn’t change. Even if it did, it would be very difficult to contradict the clear positive assessment of the midwives’ actions.

Which brings us back to Romans 13. Does the injunction to “be subject to the governing authorities” contradict the actions taken by the midwives? Not if you read further in the chapter. First, God-given jurisdiction of governing authority is defined as “God’s servant for your good. But if you do wrong, be afraid, for he does not bear the sword in vain. For he is the servant of God, an avenger who carries out God’s wrath on the wrongdoer” (Romans 13:4). But what is the obligation of people to government, when government goes beyond its God-given duties? Note the subtle: “Pay to all what is owed to them: taxes to whom taxes are owed, revenue to whom revenue is owed, respect to whom respect is owed, honor to whom honor is owed” (Romans 13:7). While there is respect and honor due to government, what are we to do when its policies contravene those of God himself? Are we to respect and honor government over God? The midwives certainly didn’t think so.

What the midwives did is reflected well elsewhere in the New Covenant Writings: “Honor everyone. Love the brotherhood. Fear God. Honor the emperor” (1 Peter 2:7). Yes, submit to governing authorities, but fear God. The midwives understood correctly that God and his ways must come first. As long as government doesn’t contravene God’s directives, go along.

Some think that the only time to ignore government is when a life is immediately at risk. That normally should be the case. But what do we do when human authority dictates harm in other ways, prevents us from speaking truth, or demands we uphold falsehood? Thankfully this kind of government overreach is historically rare. But when government attempts to take God’s place, it’s time to listen to the midwives.