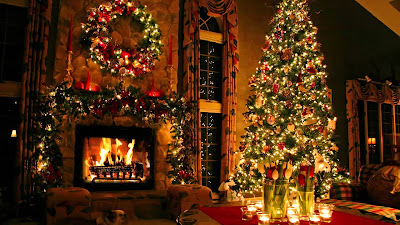 The beautiful tree, bedecked with silver and gold, warm glowing lights, beside a roaring hearth, a host of shiny presents–what’s not to like?  Christmas is beloved especially by children because of all of the beautiful traditions, the celebration of family, the feeling of security with the hearth with the promise of food nearby (“visions of sugar plums”) and especially the presents!

And since, as Christians believe, the day of Christmas has been devoted to the G-d of Israel (i.e. Yeshua) then Christmas is all the more special, right?

Allow me to briefly connect several dots showing the evolution of the Canaanite religion, it’s overt beginnings with child sacrifice to the fire gods Ba’al and Asherah, to the fire gods Jupiter and Vesta, to the modern vestigial remains as observed in certain customs of Christmas and Easter.

Thanks to modern discoveries of Ugarit texts, Ugarit being one of the ancient city-states of Canaan, we now know a little bit about some of the major players in the Canaan pantheon:

Asherah, was the fertility goddess, the “Queen of Heaven” (now immortalized with fertility symbols on Easter), married to El, a senile god who was eventually replaced with Ba’al.  The people believed that Asherah was best appeased with sexual rites, often symbolized with a pole (the “May pole” being a modern vestige of this phenonmenon) and that Ba’al was best appeased with a fire and a “green” tree.

Here we see the association between Ba’al, his fire servant Molech, and the appeasement by fire:

“They built high places for Baal in the Valley of Ben Hinnom to sacrifice their sons and daughters to Molek, though I never commanded–nor did it enter my mind–that they should do such a detestable thing and so make Judah sin,”  Jeremiah 32:35

And here we see the association of the green Ba’al trees with Asherah poles:

“That night the Lord said to him, “Take your father’s bull, and the second bull seven years old, and pull down the altar of Baal that your father has, and cut down the Asherah that is beside it,” Judges 6:25

Evidently it was common to pay homage to Ba’al by decorating the green tree with silver and gold and to pour him offerings of grain and wine:

“She has not acknowledged that I was the one who gave her the grain, the new wine and oil, who lavished on her the silver and gold– which they used for Baal….And I will punish her for the feast days of the Baals,” Hosea 2:8,13

“This is what the LORD says: “Do not learn the ways of the nations or be terrified by signs in the heavens, though the nations are terrified by them.  For the customs of the peoples are delusion; Because it is wood cut from the forest, The work of the hands of a craftsman with a cutting tool. They adorn it with silver and gold; they fasten it with hammer and nails so it will not totter,” Jeremiah 10:4

They also considered Ba’al to be not only a fire god but also a storm god, responsible for lightning.  Here we see an ancient stele showing Ba’al holding a lightning bolt (much like his successors Zeus in Greece and Jupiter in Rome):

As the one deemed responsible for weather phenomenon, the Canaanites also believed Ba’al was behind seasons of heavy rainfall and seasons of drought.  This fact sheds some light on the story of Elijah versus the prophets of Ba’al. 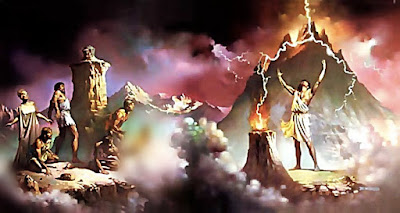 The story goes that Elijah explained to Ahab that, because Ahab had built a temple to Ba’al and married a woman who was associated with the priesthood of Asherah, the true G-d of Israel was going to show them who was real G-d of the weather.  Elijah prophesied that there would be a drought.

The drought went on for three long years.  Eventually Elijah proposed a challenge.  450 prophets of Ba’al and 450 prophets of Asherah would converge at Mount Carmel, several altars would be prepared and the gods or G-d who answered would be deemed the true G-d.

Unfortunately for the prophets of Ba’al and Asherah, their gods never answered.  But the G-d of Israel responded with vigor and everyone saw the truth with their own eyes and the Canaanites eventually lost interest in their gods.

However, these gods eventually got rebranded in Greece and Rome and a new fire cult was begun.  The god being serviced was Zeus/Jupiter.  The god in charge of the fire offerings was Vesta, god of the hearth.  Back in those days, the house was a microcosm of the public cult.  The head of the household was the pontifex maximus and the sons were the flamines (pontiffs).  Fun fact:  pontifice/pontiff means “bridge-builder”.  The hearth was the altar.  They would offer grain and wine to Vesta who presumably, in turn, brought these offerings to Jupiter.  The Romans also offered food and wine to the Lares, the deceased ancestors of the particular household.