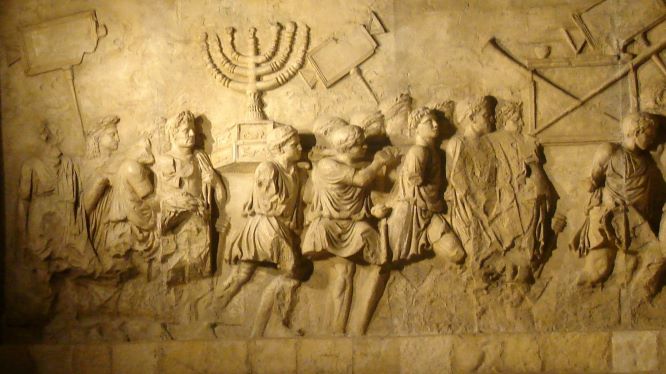 The siege of Jerusalem as depicted on the Arch of Titus in Rome.

You shall command the people of Israel that they bring to you pure beaten olive oil for the light, that a lamp may regularly be set up to burn. In the tent of meeting, outside the veil that is before the testimony, Aaron and his sons shall tend it from evening to morning before the LORD. It shall be a statute forever to be observed throughout their generations by the people of Israel. (Shemot/Exodus 27:20-21)

One of the most recognizable symbols of the Jewish people is the menorah, the seven-branched candelabra, intended for exclusive use within the Mishkan (English: Tabernacle) and later the Temple. It’s ironic that it became so recognizable, given its location, a hidden room into which only the cohanim (English: priests) were allowed to enter. The reason why we know what it looked like is because it is included in the depiction of the siege of Jerusalem on the first century Arch of Titus in Rome. Where the menorah ended up, we may never know. In spite of theories claiming items such as the Ark of the Covenant (or Testimony [see last week’s TorahBytes message]) being in safekeeping somewhere, as far as we know all the Mishkan/Temple’s furnishings, including the  menorah, are lost for good.

The menorah had a most practical purpose. It was the only light available within the ha-kodesh (English: the Holy Place). Without it, it was pitch black in there. Without it, the cohanim couldn’t fulfill their duties. The carrying away of the menorah by the Romans, like the destruction of the Temple, seemed to indicate the extinguishing of Israel’s light.

The centuries that followed were dark ones for the Jewish people. Yet, even without the menorah and the priestly service, the scattered nation never lost hope of the return of the divine light. Some may claim that the light never went out because the fire of hope in the hearts of the people never stopped burning.

The eternal light of God can’t be snuffed out. The menorah had more than a practical function. It was a symbol of the illuminating presence of God. Israel was chosen by God to be people of light, the bearers of truth for the world. God’s revelation of himself and his ways allowed Israel to clearly see the world as it is in contrast to the other nations having to grope about, trying to figure life out in the darkness of alienation from God. The time would come when the light would not shine upon Israel alone, but would flood the world with its brilliance.

And that time came.

It’s no coincidence that within a generation of the Messiah’s coming, the menorah would be carried off into the center of one of the greatest empires of all time. This was not to show that the light of God shifted from Jerusalem to Rome, but that the light of God would no longer be hidden away in the Temple.

Israel’s light was never extinguished, for eleven Jewish men were commissioned by the Messiah to bring that light to the nations. Since then each follower of Yeshua is called to bear that same light, wherever we may go.

For that to happen, each of us needs to be a menorah so to speak. In the same way that the menorah needed to be continually tended, so we need to tend to the Messiah’s light in us. Tragically, too many take his light for granted, thinking he will do what he will do in and through us, with or without our attention. But it doesn’t work that way. Like the priests of old, we need to make sure his light keeps burning bright. Yeshua’s warning not to hide our light under a basket (see Matthew 5:15) is an intentionally ridiculous image to emphasize how ludicrous it is when we do just that.

Have you ever thought of how we hide our light away? Perhaps others have reacted to you, because of your faith in Yeshua? Hopefully it was for a good reason – the Lord’s light was exposing evil in their lives. What did you when that happened? Did you apologize and dim it down? Or did you let the light do its job? Perhaps you don’t even bother shining in certain situations. You leave it at home, only turning it up during a personal prayer time or when you are with other believers. It can get tiring shining your light in one place and not another. It’s on when you’re in your car listening to music, off at the coffee shop or at work, and back on again at gatherings. I don’t think that’s how to tend the light. No wonder it’s getting so dark in some places.

It’s time to tend the light. We need to give attention to Yeshua’s presence in our lives so that he shines brightly through us. We can’t fabricate it. We can only tend it. We can only tend what we have. If you don’t have it, ask God for it. And once he sets you ablaze, keep it burning.