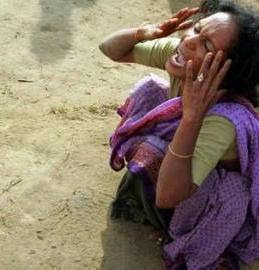 Last week’s Torah portion ended with the Akeida, the binding of Isaac. Then immediately following we read about the death of Sarah. Our Sages teach that there is a direct connection between these two events.

The Akeida is often read as concluding successfully. However, what is not often discussed is its immediate effect on Abraham and Isaac. Apparently, the event was so traumatic for both them (in each their own way) that following we read that Abraham returned from the mountain alone (Gen 22:19).

Upon seeing Abraham returning alone, we are taught that Sarah assumed the worst, and died. The Torah states that Sarah was already 127 years old, and the Sages suggest that the thought of losing Isaac was just too much for her. Abraham returned alone with his servants and found his wife dead and mourned for her (Gen 23:2b).

Of course this is speculation, but assuming for a moment it could have happened this way, why did Sarah die?

This question left our Sages scratching their heads. Did Sarah not trust G-d to bring Isaac back? Did she not trust Abraham? Targum Jonathan, an early Aramaic paraphrase and commentary on the Torah, even suggests that Satan told Sarah that Abraham actually slaughtered Isaac, and that she cried out in grief and fell down dead.

Either way, according to this perspective, she did not fully wait to hear any news from Abraham himself. She assumed the worse!

How often do we do the same thing? It does not matter how many miracles we have witnessed, how many blessings we have experienced, or the promises we have been told. When things begin to go sour we often assume the worst. Instead of trusting G-d we begin blaming Him before even waiting to find out any news.

We don’t exactly know why Sarah died. But we do know that worrying and thinking negatively do not help any situation. That is why we are encouraged to “be anxious for nothing” (Phil 4:6). And when we do find ourselves sinking in despair, we must take those thoughts captive (2 Cor 10:5) and focus on what we know to be true. For in Torah, and through the Living Torah, we have the ability to understand fully who we really are, what’s in store, and what G-d expects from us.