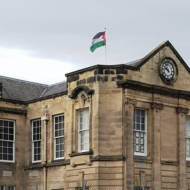 To protest a soccer match between Israel and Scotland, intruders broke into a primary school and raised a Palestinian flag on its roof.

Last weekend, unknown “activists” broke into a school in Scotland, climbed up the roof and put a Palestinian flag on the flag pole, reported local newspaper Ayr Advertiser.

The flag was hoisted on the roof of the Ayr Grammar Primary School, the same weekend that Israel’s national soccer team played against Scotland in Nations League match that ended in a 1-1 draw.

“The flag currently flying at Ayr Grammar Primary was placed there by intruders during the weekend,” the school tweeted.

Ayr is located on the west coast of Scotland, about 50 kilometers (30 miles) southwest of the city of Glasgow.

After concerns that the anti-Israel activists had broken into the school to commit the act, investigators discovered that the perpetrators had illegally gained access to the roof of the school from outside the building.

After being notified of the flag’s presence, the South Ayrshire Council issued a statement that the situation was being taken seriously.

After taking down the flag, a council spokesperson told the paper that “access to the roof was not gained through the school, so we are reviewing external access, as a result of this incident.”

Last month, a Palestinian living in Scotland was arrested and charged wih terrorism-related crimes as part of a police investigation into the activities of a group called the New IRA.

Dr. Issam Hijjawi, 62, a known Palestinian activist who lives in Edinburgh, was charged with “preparatory acts of terrorism.” He was arrested at Heathrow Airport as he attempted to fly to Lebanon

Britain’s MI5 security agency tracked Hijjawi, who met with members of the New IRA, a group suspected of being involved in terrorism that was formed by former Irish Republican Army (IRA) terror group members.