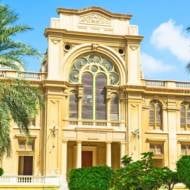 Alexandria’s ancient synagogue re-opened with great fanfare, yet only 20 Jews remain in a nation that was home to a thriving community less than a century ago.

Egypt’s Tourism and Antiquities Minister Khaled al-Anany re-inaugurated the ancient Eliyahu Hanavi synagogue in Alexandria, Egypt, January 10. In attendance were 25 foreign ambassadors and only three Jews, including the Head of the Jewish Community in Alexandria, reports the Egypt Independent.

The project cost $4 million and took two years. The synagogue has a library with about 50 ancient Torah scrolls and a collection of books, some of which date back to the 15th century, according to Middle East Monitor. Today, fewer than 20 Jews live in Egypt and only a handful live in Alexandria.

The reasons there are so few Jews in Egypt in the year 2020 are the pogroms, murders, and official expulsion by the Eyptian government during the past century.

These facts didn’t stop mainstream sources like The Times of the UK from publishing articles about the synagogue’s reopening that all but ignored the vicious persecution Jews faced in Egypt.

According to the watchdog organization UK Media Watch, the Times article whitewashed Jewish-Egyptian history. Though it mentioned that over 99 percent of Egypt’s Jewish population left after World War II, it did not say why.

The media watchdog group filed a formal complaint with over the The Times’ coverage.

With regard to the government’s motive for restoring the synagogue, some see it as part of a ploy by the Egyptian government to preserve ancient Jewish heritage sites to boost tourism after the industry suffered due to violent riots during the “Arab Spring” several years ago.

The repairs were necessitated after rainwater leaked into the house of worship, eventually causing the roof to partially collapse.Urgent repairs and restoration were required to preserve the impressive two-story synagogue, which can house 700 worshipers.

“Will we ever see a resurgence of Jewish life in Egypt? I don’t know,” said Alec Nacamuli, a former resident of Alexandria and a board member of the Nebi Daniel Association, an organization that works to preserve Jewish sites in Egypt, reports Times of Israel. “At least, there will be traces of our passage and history there. That is very significant.”

In 2018, Egyptian President Abdel Fattah el-Sissi  said, “If we have Jews, we will build [synagogues] for them.” Even in the face of widespread criticism, el-Sissi meets with Jewish delegations in the U.S. and Cairo.

Though Israel’s Foreign Ministry did not attend the event, spokesman Lior Haiat said, “We take a very positive view of Egypt’s efforts to preserve the sites of the Jewish community that have existed in Egypt for more than 2,000 years,” according to Times of Israel.

The Alexandria Jewish community is expected to hold another inauguration ceremony at a later date, which Israeli representatives will attend.

Jewish life in Egypt dates back to biblical times.

Eliyahu Hanavi synagogue was built in 1354 by Sephardic Jews fleeing the Inquisition in Spain and Portugal. It was destroyed by fire in 1798 when Napoleon Bonaparte invaded Egypt.

In 1850, it was rebuilt. By that time, the Jewish community was one of the largest ethnic groups in Alexandria.

“From 1805-1956 Jews played a dominant role in Egyptian society, contributing significantly to the development of finance, industry, urban development, and culture. The British, who colonized Egypt from 1882 to 1956, treated the Jews well and as a result, many European Jews who were suffering persecution in their own countries immigrated to Egypt,” explains the website of an organization called “Jews Indigenous to the Middle East and North Africa (Jimena).

However, massive anti-Jewish riots and pogroms began in 1938 with the rise of Nazi Germany. This led to the annihilation of the countries Jewish community, following draconian laws and persecution. Nearly its entire Jewish community fled to Israel, following the state’s establishment in 1948.

From 1956 to 1970, Egypt’s President Gamal Abdel Nasser ruled. In 1956, he declared Jews enemies of the state after the Suez Crisis. Any remaining Jews were given two days to flee, forcing them to leave behind nearly everything they owned.

In the Jewish community’s heyday in Egypt, Alexandria was home to more than a dozen synagogues. Today, Eliyahu Hanavi is just one of two remaining.

In 1979, Egypt and Israel signed a peace treaty. They have since maintained formal diplomatic relations.