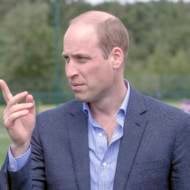 We welcome Prince Willaim’s visit to Israel, but not the UK’s reference to Jerusalem as the “Occupied Palestinian Territories.” We must not remain silent.

Prince William, Queen Elizabeth’s grandson and second-in-line to the throne, will become the first British royal to pay an official visit to Israel when he lands in the Jewish state on Monday.

During the four-day tour, the prince will visit the Yad Vashem Holocaust memorial accompanied by Britain’s Chief Rabbi Ephraim Mirvis and will also view Jerusalem’s Old City from the Mount of Olives.

Israel is very excited about the visit, and Prime Minister Benjamin Netanyahu welcomed the historic event saying that William “will be received here with great affection.”

Jason Knauf, the prince’s Communications Secretary, underscored the “non-political” nature of the visit.

“The non-political nature of his royal highness’s role—in common with all royal visits overseas—allows a spotlight to be brought to bear on the people of the region,” Knauf said.

However, the Duke of Cambridge’s visit has already struck unpleasant political chords.

Furthermore, Kensington Palace announced that William’s visit to Jerusalem will be a part of his official visit to the PA, even though it is Israel’s capital.

“The next day’s programme in the Occupied Palestinian Territories will begin with a short briefing on the history and geography of Jerusalem’s Old City from a viewing point at the Mount of Olives,” the itinerary published by the palace said.

While we welcome this visit, we cannot accept Israel’s capital for the past 3,000 years being referred to as “the Occupied Palestinian Territories” and must not remain silent in the face of such an affront.

Please write the British embassy in Israel and Kensington Palace a polite message welcoming Prince William while underscoring your objection to the UK’s use of the term “Occupied Palestinian Territories” in reference to Jerusalem, Israel’s eternal capital.

Let the United Kingdom know what we think about Jerusalem and how it should be referred too.

Protest the UK’s reference to Jerusalem as “Occupied”!

1. Send the British embassy in Israel a message at: webmaster.telaviv@fco.gov.uk