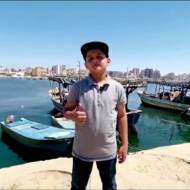 Abdel Rahman al-Shantti raps in fluent English, but the line was drawn when he talked about peace with Israel.

By Yakri Benzion, United With Israel

Abdel Rahman al-Shantti is a bright and talented 11-year-old kid in Gaza who loves the NBA, wants to be a rapper like Eminem and be good enough to eventually tour the United States.

But al-Shantti lives in Gaza ,where the Iran-backed Hamas terror group is in charge, and his recent interview in which he called for peace with Israel landed him in hot water with his father and fellow Gazans who fear that saying anything about peace might see them locked up in a Hamas jail.

The up-and-coming star was interviewed in the media and told the Russian news outlet Russia Today that he wants “to spread love between us and Israel … there’s no reason for fighting and wars. We need to let this relationship become better and better.”

In a Reuters interview he said, “My message talks about peace and I want to convey it to the largest number of people and I want to show what life in Gaza is like to the outside,” adding that he thinks children in Gaza want to “be like the other children from the outside, from America.”

But the young al-Shantti is in trouble because of that message. While the Reuters interview is available online, the similar interview on Russia Today was yanked after his father, Saleh al-Shantti, asked the news website to take it down, saying his son didn’t mean peace with Israel specifically but peace with the world, the New York Times reported.

“The boy is 11 years old and he misspoke,” he told the Times. “He was very tired. It can happen.”

Other Palestinians in Gaza trashed al-Shantti on social media, accusing him and his family of not knowing history.

His father’s fears may be justified.

Earlier this year Hamas police arrested Gazan peace activisit Rami Aman for the crime of holding a ZOOM meeting with Israelis near the beginning of the coronavirus pandemic.

The organization UN Watch, which monitors the UN’s lack of action on human rights, praised the Times for mentioning Aman in the article on al-Shantti.

“Yet despite these threats, the New York Times today reported again on Rami Aman. We salute their courage,” UN Watch tweeted.