Israel, the Church and the Jews

Product prices and availability are accurate as of the date/time indicated and are subject to change. Any price and availability information displayed on [relevant Amazon Site(s), as applicable] at the time of purchase will apply to the purchase of this product. 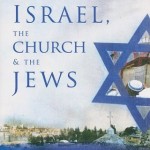 In his new book, Israel, the Church and the Jews, Jacob Prasch explains how contemporary Middle Eastern events fulfill biblical prophecy. Just as Israel experienced repercussions for their renunciation of religious faith and moral decline, current Christian democracies are beginning to experience similar repercussions for digressing from their biblical heritage and moral backslide. Prasch discusses the significance of current political events such as the Annapolis Summit. The event, held in November of 2007, was attended by President Bush, Secretary of State Rice, and several European, Middle Eastern and Israeli heads of State. The ramification of the recent Hezbollah attacks and the situation in Iran, in light of the prophecies in the biblical book of Daniel, are covered in his book. Prasch discusses the controversies surrounding John Hagee s latest book regarding the relationship between Israel and the United States. Prasch is swamped with letters and emails questioning how our political and church leaders can seek peace with Islam while ignoring the plight of Christians in the Muslim countries. Prasch believes in a divine judgment on nations cursing Israel and persecuting the true church. In addition to demonstrating how current events tie into biblical prophecy, Jacob discusses what he believes to be false teachings within the Evangelical church. The true church must understand and follow the theology presented in the Bible. Biblical understanding can only be achieved by interpreting the scripture in light of the Jewish faith and culture. For example, Jacob uses Jewish Midrash (a method of interpreting scripture) to explain the use of Old Testament quotes found within the New Testament. Jacob has a deep desire to evangelize the Jewish people, and he believes the divine strategy includes the Jewish rejection and then final acceptance of Jesus as the Messiah.