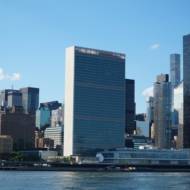 Senators Cruz and Graham introduced a bill calling to cut US funding to the UN until it repeals the recent anti-Israel resolution.

Senators Ted Cruz (R-TX) and Lindsey Graham (R-SC) on Thursday introduced the Safeguard Israel Act, calling to cut US funding to the United Nations (UN) until the president certifies to Congress that United Nations Security Council (UNSC) Resolution 2334 has been repealed.

“The resolution passed last month undermines and delegitimizes our ally, Israel,” Cruz said in a statement.

“President Obama betrayed decades of robust bipartisan American support for Israel at the United Nations by permitting the passage of a biased resolution that condemns our close friend and ally,” Cruz said in an interview with Morning Joe and Fox and Friends. “The Security Council’s resolution is only the latest example of the UN’s long history of obsessive hostility towards Israel and we must not let this shameful action stand. Congress must hold the UN accountable and use our leverage as its largest contributor to push for the repeal of this resolution, making it clear to the world that Congress stands unequivocally against efforts to undermine Israel.”

American funding accounts for 22 percent of the UN budget, the highest of any member state.

“I don’t think it’s a good investment for the American taxpayer to give money to an organization that condemns the only democracy in the Mideast, and takes the settlement issue and says that’s the most important and only issue in terms of an impediment to peace,” said Graham. “I begged the UN months before, don’t put me in this box. This was John Kerry and Obama taking a slap at Israel. We’re going to push back. I think most Americans believe that the United Nations has become more anti-Semitic, more anti-Israeli. And I’m a big internationalist, but we’re going to stop the money until we get this fixed. I appreciate Ted’s leadership on this.”

In their legislation, Cruz and Graham outline numerous reasons why UNSC Resolution 2334 should be repealed, including attempts to pre-judge the basis for negotiations, predetermine the outcome of negotiations, and dictate terms and conditions, which is an abandonment of long-standing US policy and previous commitments made to Israel.

Similarly, the resolution falsely claims that Israel’s sovereignty over the eastern part of Jerusalem and Jewish communities in Judea and Samaria are illegal under international law, and that the Old City of Jerusalem, along with the Temple Mount – the holiest site for the Jewish people – and the Western Wall are ‘‘occupied Palestinian territory.’’

The resolution also encourages the International Criminal Court (ICC) to open an illegitimate formal investigation against Israel, the senators say.

Cruz and Graham also believe that the resolution will strengthen the Palestinian diplomatic, economic, and legal warfare campaign against Israel, including BDS (boycotts, divestment and sanctions).

“The United States must use this influence to help our allies, in this case Israel, which is crucial to our own national security interests,” concluded Cruz.