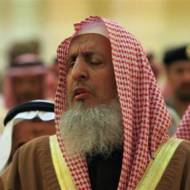 The Grand Mufti of Saudi Arabia issued a ruling forbidding war against the Jews and proclaiming that Hamas is a terror group.

The Grand Mufti of Saudi Arabia, Abdulaziz Al Sheikh, issued a surprising religious ruling, saying that fighting against Israel was inappropriate and that Hamas is a “terror organization.”

The Muslim cleric issued the ruling while answering a question on a television program regarding the Palestinian riots surrounding the Temple Mount in July, Turkey’s Anadolu news agency reported.

“We congratulate Abdulaziz Al Sheikh, the Grand Mufti of Saudi Arabia as well as the head of Ulema (Islamic scholars), for his fatwa [Muslim religious ruling] forbidding the fight against the Jews and forbidding to kill them,” Kara, a Druze, tweeted on Monday.

“He will be welcomed with a high level of respect,” Kara stated.

This was not the cleric’s only exceptional proclamation. In September 2016, he ruled that Iranians are descendants of Zoroastrians and are therefore “not Muslims.” Their “enmity to Islam, especially the Sunnis, is very old,” he said.