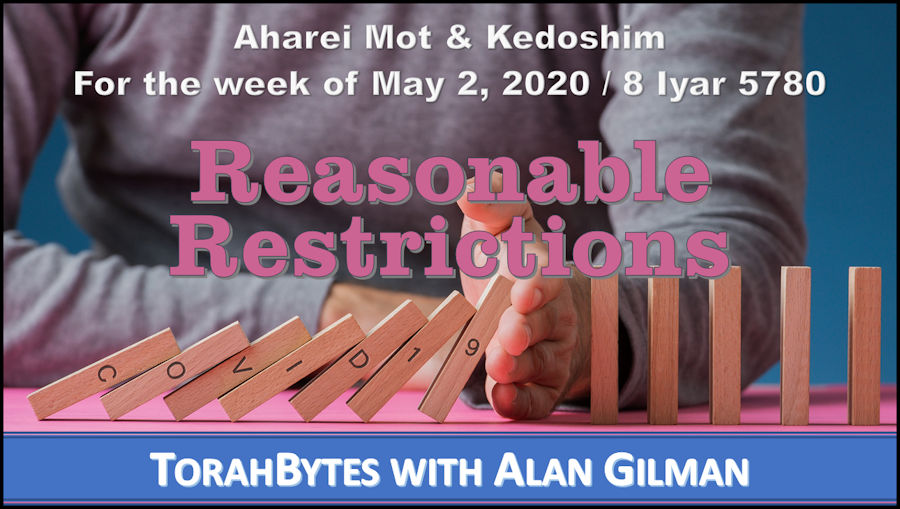 For everyone who does any of these abominations, the persons who do them shall be cut off from among their people. (Vayikra/Leviticus 18:29)

As the COVID-19 crisis continues into another week, an increasing number of people are getting frustrated with the restrictions imposed upon us. This is exacerbated by all sorts of critiques of these cautionary measures and the supposed reasons for them. Doubt over the effectiveness of and motives behind the closure of businesses and schools, social distancing, and travel restrictions are clearly wearing on the masses. In democratic societies, governed by the people’s representatives, it is incumbent upon our leaders to openly inform us as to the justification of their policies. Obviously, they want to avoid unrest at all costs.

As time moves on, especially in regions where the percentage of infections and death are relatively low and/or on the decrease, people will naturally become less and less cautious if not outright rebellious. Unless the authorities continue to provide a good case for continued restrictions, people will find ways to get around them.

I am not advocating ignoring government policy towards the current crisis; I am only describing what I understand to be normal human behavior especially when doubting the legitimacy of such policies. And I do so this week, because of the parallel between COVID-19 directives and God’s directives in the current parsha (weekly Torah reading portion).

We are in a section of Torah that contains directives regarding sexual behavior. And much like how some people are feeling about their government’s policies over COVID-19, many regard God’s words of caution here as overblown and unnecessary.

It doesn’t help that many would find the term “abomination” offensive. The Hebrew word “to-ei-vah’,” means “disgusting” or “repulsive.” According to Torah this is what God thinks of certain behaviors. However, no one, myself included, likes it when someone else looks negatively at something that we value. Ironically in many modern societies, such harsh regard toward anything has become the worst abomination of all. How dare anyone judge anyone else!

But this is not about personal preference; it’s about the welfare of both individuals and societies. God doesn’t label something as an abomination just because he is in charge. Nor are his moral dictates arbitrary. They may appear that way to us because we don’t understand the basis for such directives.

Let me illustrate with something from these unusual days of COVID-19. The other evening my wife and I needed to make a delivery to a family member who lives near one of the more lovely areas of town, where there is a park and beach by a river. As it was also the nicest evening of the spring so far, we ventured on a stroll to see the sunset. In keeping with the city’s rules, we walked through the park, enjoying the beauty as we did. As we were returning to our car we happened upon a clear violation of the current guidelines: four young people, while observing social distancing, were throwing a ball to one another. If COVID-19 is as lethal as some think, they were being completely irresponsible. Since each person may themselves be a carrier, sharing contact via the ball potentially extends the risk of infection to not only each participant, but to anyone else each participant comes into contact with afterwards. And to think that the virus on the ball may find its way from the park to a seniors’ residence where it could engulf the elderly, plus the staff and their families, what the four were doing in entertaining themselves was more than irresponsible, it was an abomination! To be honest I didn’t really think that, because I have my doubts over whether such behavior is as risky as some say. But if it were, then such an extreme reaction would be legitimate.

Unlike our government, God, the master designer of the universe, intimately understands the details of his design, so when he regards particular behaviors negatively, it’s because he is fully aware of their implications. As I read at the beginning: “persons who do them shall be cut off from among their people.” First, note that this is one of the rare Torah passages that clearly speaks to all peoples, not just Israel. And because it is a universal statement, “cut off from among their people,” it is not about shunning or other forms of community judgement as might be the case if this were a directive specific to Israel. Instead it is a serious warning of the consequences of these behaviors.

Although governments struggle to figure out the true nature of COVID-19, we have been gifted with God’s all-knowing insight on the nature of human sexuality. Societal leaders may or may not have a handle on what is really going on; they may or may not have our best interests in mind. Yet, the limitations on our behavior that Torah delineates are rooted in God’s understanding of the safest and most healthy way to live.