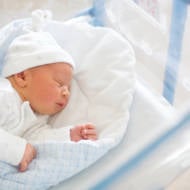 This may be a record-setting number of home births for the emergency service Magen David Adom!

Issachar Weiss, 24, a volunteer paramedic for Magen David Adom (MDA) in the Tel Aviv area, had the rare opportunity to deliver three babies within a 48-hour span.

The first child was born Sunday at 4:30 a.m. Weiss arrived at a home in the Tel Aviv suburb of Givatayim to find that the baby was already crowning. He encouraged the woman to push and the baby was delivered.

On Monday, Weiss was called to Bnei Brak and delivered a baby at 5 a.m. as the mother failed to make it to the hospital in time.

That same evening, the volunteer paramedic delivered a baby in the Hatikvah neighborhood of Tel Aviv.

Weiss wrote on MDA’s Facebook page that be believes this might be a record for home births for the emergency service.

“Birth at home is a very unusual thing,” he wrote. “We don’t like to do it, but when it happens and is successful it’s really fun. Only for me it was times three in 48 hours. I am still so excited.”

Israel has the highest birthrate in the OECD with 3.1 children per woman. This is almost a full child mote than the next  countries in the fertility rankings, Mexico and Turkey, according to a Taub Center report. The last time there was such a high fertility rate was in the US, toward the end of the baby boom in the mid-1960’s, in Italy in 1931, in Germany in 1914, in the UK in 1908, and in France in 1889.

The report includes data that counters claims that Israel’s high birthrate is due to a drive to rebuild the Jewish population after the Holocaust, Israeli policies that make it easier for Israeli women to balance work and family, or statistics skewed by Orthodox Jewish communities that average seven children per woman.

“The rise in Israel’s fertility over the last two decades has been largely driven by the secular and traditional Jewish populations, whose combined fertility rate is greater than 2.2, which is itself higher than the overall fertility in any other OECD country,” according to the report.

“It is also exceptional because strong pronatalist norms cut across all educational classes and levels of religiosity, and because fertility has been increasing alongside a rise in the age at which women first give birth and increasing education levels — at least in the Jewish population. From an international perspective, these are extremely unusual patterns,” the report continued.

The Taub Center report also noted that educated women tend to have fewer children than less education women. “However, by age 40, Israeli women with a college degree have the same number of children as those whose highest level of education is high school.”

The report admits that Israel’s high fertility trends “remain a mystery.” To that, all we can say is, “Mazel Tov!”