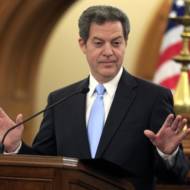 Kansas became the 21st state to pass an anti-BDS law, marking the latest victory in the fight against boycotting Israel on the US state level.

Kansas became the latest state to adopt a law barring the state from doing business with entities that boycott Israel when Governor Sam Brownback signed the bill into law on Friday.

The bill also states that the problem with such boycotts is that they are imposed “on the basis of such person’s location in such places.”

Advocates of these measures have emphasized that they do not raise any First Amendment issues, as private parties are still free to protest, boycott, or speak out against Israel in any way. However, states may be obligated to protect taxpayer money from being used to promote or support discrimination based on religion, race, or nationality.

The passage of anti-BDS legislation reflects an understanding that the campaign “is not like the civil rights protests, as its supporters love to claim, but rather more like the anti-Jewish boycotts so common in Europe in the 20th century, and in the Arab world until this day,” Northwestern University law professor Eugene Kontorovich wrote in The Washington Post in 2015.