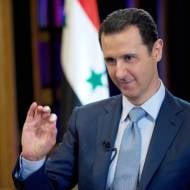 Israeli Minister Yuval Steinitz warned the Syrian president that he is not immune and will be held personally accountable by Israel if Iran attacks.

By: Beth Stern, United with ISrael

Energy minister, member of the security cabinet and Netanyahu confidant Yuval Steinitz took off the gloves Monday in an interview with Ynet news, sending a public warning to Syrian leader Bashar Assad that he better stop the Iranians from attacking Israel from his country.

When asked about the many recent reports in the media about Iran possibly preparing to attack Israel with a missile barrage in revenge for attacks its forces have suffered in Syrian bases allegedly at the hands of the Jewish state, Steinitz answered first by saying that he will not confirm what Israel has or hasn’t done. He also stated categorically that Israel is not interested in war with anyone.

“However,” the minister went on, “we absolutely cannot allow Iran to turn Syria into a base of the Iranian Revolutionary Guards Corps, with ballistic missiles, and anti-aircraft missiles that threaten us.”

What happened in Lebanon with Hezbollah was bad enough, he continued, as the terror organization is funded by Iran but is still only a proxy. Allowing the terror state to ensconce itself in Syria would be much, much worse, considering that it’s a regional power that has stated publicly its desire to destroy Israel countless times.

Steinitz then threatened Assad directly and repeatedly, saying that the Syrian leader is responsible for what comes into his country from his allies, and must understand there will be a personal “price tag” for allowing Iran to build up its forces in the country. “If Assad’s regime … allows Iran to attack Israel from Syria, this has to be the end of Assad, the end of his regime,” he stated forcefully and in various ways throughout the interview.

When asked what Russia might think of this, when it has invested so much in propping up the Syrian regime, Steinitz responded that Israel and Russia “have many mutual interests [but] sometimes there are also conflicts of interest,” and the red line that Israel has drawn regarding Iran in Syria is set in stone. His conclusion, therefore, was, “If anyone is interested in maintaining Assad’s survival, they should tell him to prevent missile and drone attacks on Israel.”

Prime Minister Benjamin Netanyahu is going to Moscow on Wednesday for consultations with President Putin, with this subject unquestionably high on the discussion list. Whether Putin can be convinced once and for all that Israel will not budge from its stance vis-à-vis the Islamic Republic, however, remains to be seen.