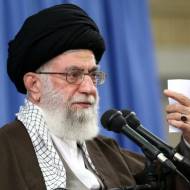 Gotta love the irony! Khamenei assailed Western notions of gender equality, while placing the housewife’s role on a pedestal.

“Turning a woman into a commodity and means of pleasure in the Western world is most probably among plots hatched by Zionists in order to destroy human society,” Iran’s Supreme leader Ali Khamenei stated, while stressing the female role as housewife.

In a speech marking the anniversary of Fatemeh’s birth, and in honor of Iranian Mother’s Day on Sunday, Khamenei lauded her as an exemplary wife and mother and as a “complete model for the Muslim woman,” which transcends human understanding. Fatemeh was the daughter of Prophet Mohammad.

He criticized the “faulty and empty claims of the West in order to tarnish Islam’s viewpoint about women.” He declared “these deceived, negligent people scoff at a woman’s duty as housewife, while being a housewife means to raise human beings and produce the most majestic product and commodity in the existing world, which is the human being.” He added certain allegations regarding women’s rights are aimed at weakening women.

His words echo ancient anti-Semitic notions that all bad ideas and traits are generated by Jews hatching a global plot to corrupt humanity.

He lamented that in some “Islamic environments, duties and expectations are brought up for women, which in fact, amount to degradation and humiliation of women.”

“Western thinkers and people who pursue such issues as gender equality, regret what they have done due to the corruption it has caused, and I hope the purpose of those people, who raise such issues inside the country, is not [promoting] the same incorrect Western concept,” he added.